TRULY, MADLY by Stephen Galloway is a sweeping and heartbreaking Hollywood biography about the passionate, turbulent marriage of Laurence Olivier and Vivien Leigh. Spanning two world wars, the Golden Age of Hollywood, and the upheavals of the 1960’s, TRULY, MADLY takes readers on a bewitching journey through the history of this seemingly-doomed love affair, as well as the history of film itself. We’ve put together an essential companion watchlist for the book, including some of Vivien Leigh and Laurence Olivier’s most iconic roles alongside some fascinating behind-the-scenes stories from TRULY, MADLY.

“FIRE OVER ENGLAND was one of Britain’s first propaganda pieces since the Nazis had seized power, a summons to patriotism and self-sacrifice shot three years before England went to war. Korda was acutely aware of the danger Hitler posed; he had fled one dictatorship and was loath to flee another, though he remained largely ignored at a time when the British public was deeply divided. Such admired figures as King Edward VIII were sympathetic to the Nazis (after his abdication, the monarch would visit Hitler at his rural retreat) and several of the country’s press barons strongly favored appeasement; indeed, the Times had refused to publish warnings by its Berlin correspondent of the threat the Nazis posed. But the apolitical Vivien wanted the part for another reason: Olivier was set to star.”

Larry would have liked another shot at stardom, despite his obsession with the theater; but he also wished to remain with Vivien and knew it was unrealistic, given the potential publicity, for her to travel to Los Angeles. Still, even she was pushing him to take the role. Torn, he turned to Richardson and asked whether he should make the film.

“Vivien was exactly the opposite of Scarlett O’Hara, who said something like, ‘I’ll worry about it tomorrow,’” recalled Olivier, slightly misquoting her last line in GWTW (“After all, tomorrow is another day”). “She worried about everything— yesterday, today, and tomorrow.”

“The story we do is so dreary, that I cannot look forward to it,” she wrote Holman, continuing the correspondence that kept them close…

Later, she came to love the picture, and would consider it one of her finest.”

““Miss Leigh told me this morning that Laurence Olivier has told her that he will definitely do Rebecca if she does it,” noted Selznick.

Larry, in fact, had guaranteed no such thing.”

As England entered its gravest crisis, Vivien and Larry knew they had to do more, but what? Attacks on them were growing daily; no longer mere actors but megastars whose every utterance was dissected by a hungry public, both were prime targets for criticism and yet were shocked by its intensity. . . .

Korda came to the rescue. The producer had been a voice in the wilderness, warning everyone he knew (and he knew everyone) about the Nazis. Now he proposed a new film, designed to boost British morale.

She was an interloper, an outsider among this band of brothers, who resisted Kazan’s attempts to fit her acting style to theirs. Because of that, “For the first three weeks, I was as miserable as I’ve ever been,” the director maintained. “She kept saying, ‘Well, Larry and I in England . . .’ and I’d say, ‘You’re not doing it with Larry now, you’re doing it with me, and I don’t like it that way.’”

It is impossible to separate Olivier’s most brilliant creation from the drama that permeated his domestic life. The more angelic he was with Vivien, the more demonic he became onstage, as if his conscious and unconscious selves were at war— living proof, it seemed, of Jung’s notion that “once the unconscious gets into active opposition to consciousness, it simply refuses to be suppressed.” At home, Larry was caring and compassionate. But when he stared in the mirror as he developed his Richard, he wrote later, “the monster stared back at me and smiled.”

“Vivien was terribly upset and the marriage punctured any dreams she might have had of reconciliation. When she arrived on the set of Roman Spring, “she had obviously been crying her eyes out,” said assistant director Charles Castle. “She looked awful—woebegone and bloated. She was in the middle of doing her big love scene with Warren Beatty, too, where she had to act tenderly and affectionately. [Director] José Quintero had to handle her very carefully. Until her dying day, I don’t think Vivien believed Olivier was beyond recall.”

“[Spartacus] was bedeviled at every step. It was already two and a half times over budget before shooting began, and the screenplay (written under a pseudonym by the blacklisted Dalton Trumbo) was changing daily. When production kicked off in February 1959, leading lady Sabine Bethmann was fired; her replacement, Jean Simmons, fell ill for a month, forcing a reorganization of the shooting schedule; and director Anthony Mann left through one door as his replacement, the thirty-year-old Stanley Kubrick, entered through another. Nor did Olivier care for his costar, Douglas, joking to Bushell that he “was remarkable in having achieved stardom when equipped with only two expressions.”

For more on the films that made Viv and Larry famous, and their heartbreaking behind-the-scenes romance, TRULY, MADLY is available in hardcover, ebook, and audio from the retailers below. 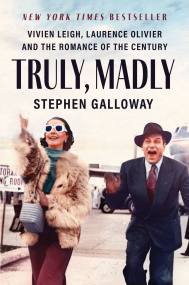 In 1934, a friend brought fledgling actress Vivien Leigh to see Theatre Royal, where she would first lay eyes on Laurence Olivier in his brilliant performance as Anthony Cavendish. That night, she confided to a friend, he was the man she was going to marry. There was just one problem: she was already married—and so was he.

TRULY, MADLY is the biography of a marriage, a love affair that still captivates millions, even decades after both actors' deaths. Vivien and Larry were two of the first truly global celebrities – their fame fueled by the explosive growth of tabloids and television, which helped and hurt them in equal measure. They seemed to have it all and yet, in their own minds, they were doomed, blighted by her long-undiagnosed mental-illness, which transformed their relationship from the stuff of dreams into a living nightmare.

Through new research, including exclusive access to previously unpublished correspondence and interviews with their friends and family, author Stephen Galloway takes readers on a bewitching journey. He brilliantly studies their tempestuous liaison, one that took place against the backdrop of two world wars, the Golden Age of Hollywood and the upheavals of the 1960s — as they struggled with love, loss and the ultimate agony of their parting.