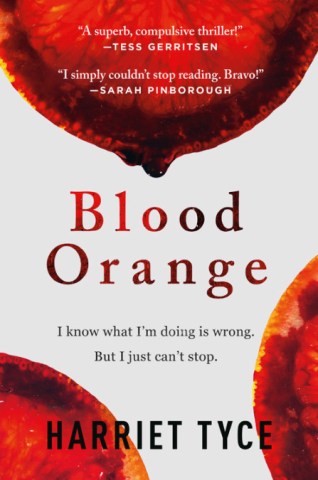 A young lawyer’s outwardly perfect life spirals out of control as she takes on her first murder case in this dark and twisty debut thriller for readers of Paula Hawkins, A.J. Finn, or Shari Lapena.

"BLOOD ORANGE is a brilliant marriage between psychological suspense and legal thriller. The debut novel of the year. It's a stunning portrayal of both one woman's fight for justice for an accused murderer-and of a life spinning out of control. Harriet Tyce is now on my 'must read' list."—Jeff Abbott, New York Times bestselling author
"Gritty and compelling, BLOOD ORANGE drags you right into the hearts of the flawed characters and their stories from the get go. A book that will keep you up all night."—Kate Hamer, bestselling author
"This brilliant debut from Harriet Tyce has it all."—Rachel Abbott, 3 million copy eBook bestselling author of Only the Innocent

"It was all brilliantly done. Writing, plotting, characters--wonderful and deeply satisfying, devour-in-one-sitting stuff!"—Lucy Mangan, Guardian and Stylist columnist and author of Bookworm: A Memoir of Childhood Reading
"A promising debut... A page-turner that drives to a shocking and satisfying ending."—Publisher's Weekly

"This debut novel by a former barrister displays the pacing skills and smooth prose of a seasoned author, as suspense builds to a stunning climax. Keep your eyes on Tyce."—Booklist
"Chilling debut...beautifully crafted...A domestic thriller that twists and turns down a dark rabbit hole of suspense toward an explosive ending that will stick with readers long after they turn the page."—The Big Thrill
"BLOOD ORANGE caters to [a] growing craving to dissect people's hidden impulses, [with] a staggering finale that is guaranteed to leave readers shocked."—Palm Beach Post
"A serious contender for best debut of the year."—CrimeReads.com, Best New Thrillers
"Outstanding...The story of a marriage, of the point where love can turn to hate and how a person must regain her own sense of self. Obsession is a dangerous thing."—South Florida Sun-Sentinel
"The plot of this engrossing first novel is as audacious as anything you'll read this year."—Toronto Star
Read More Read Less